Children react to their environment in different ways, and reactions can vary depending on the child’s gender and age. Children exposed to family violence are more likely to develop social, emotional, psychological and or behavioral problems than those who are not. Recent research indicates that children who witness domestic violence show more anxiety, low self-esteem, depression, anger and temperament problems than children who do not witness violence in the home. The trauma they experience can show up in emotional, behavioral, social and physical disturbances that affect their development and can continue into adulthood.

Some facts about children and domestic violence include: 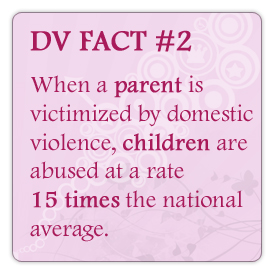