If you are uncertain whether your partner is abusive or if you want to be able to tell at the beginning of the relationship if the other person has the potential to become abusive, there are behaviors you can look for, including the following:

JEALOUSY: An person who chooses to abuse will always say that jealousy is a sign of love. Jealousy has nothing to do with love; it’s a sign of possessiveness and lack of trust. In a healthy relationship, the partners trust each other unless one of them has legitimately done something to break that trust.

CONTROLLING BEHAVIOR: At first, the batterer will say this behavior is because they are concerned for your safety, a need for you to use time well or to make good decisions. People who choose to abuse others, will be angry if you are “late” coming back from the store or an appointment; you will be questioned closely about where you went, who you talked to. At this behavior gets worse, the abusive person may not let you make personal decisions about the house, your clothing, or going to church. They may keep all the money; or may make you ask permission to leave the house or room.

QUICK INVOLVEMENT: Many domestic violence victims only knew their abusive partner for a few months before they were living together. This abusive partner may come on like a whirlwind, claiming “you’re the only person I could ever talk to” and “I’ve never felt loved like this by anyone.” People who choose to abuse are generally very charming at the beginning of the relationship. You will be pressured to commit in such a way that later you may feel very guilty if you want to slow down involvement or break up.

UNREALISTIC EXPECTATIONS: Abusive people will expect their partner to meet all their needs: the perfect partner, lover, and friend. They say things like “if you love me, I’m all you need and you’re all I need.” You are supposed to take care of everything for them; emotionally, physically, and sometimes economically.

ISOLATION: The abusive person tries to cut the partner off from all resources. If you are close to family, you’re “tied to the apron strings” or you are accused of “cheating” if you are out with friends. The abusive person will accuse people who are supportive of causing trouble, and may restrict use of the phone. They will gradually isolate you from all of your friends. They may not let you use a car (or have one that is reliable), and may try to keep you from working or going to school. Some abusive people will try to get you into legal trouble so that you are afraid to drive or go out.

BLAMES OTHERS FOR PROBLEMS: If your partner is chronically unemployed, someone is always doing them wrong or is out to get them. They may make mistakes and then blame you for upsetting them so that they can’t concentrate on their work. They will tell you that you are at fault for almost anything that goes wrong.

BLAMES OTHERS FOR FEELINGS: Abusive people will tell you, “you made me mad” and “I can’t help being angry.” Although they actually makes the decision about how they think or feel, they will use feelings to manipulate you. People who choose to abuse see themselves as the “victim” in the relationship, and do not take responsibility for their own feelings or behaviors.

HYPERSENSITIVITY: People who choose to abuse are easily insulted, and may take the slightest setback as a personal attack. They will rant and rave about the injustice of things that are really just a part of living, such as having to get up for work, getting a traffic ticket, or being asked to help with chores.

CRUELTY TO ANIMALS OR CHILDREN: This is a person who punishes animals brutally or is insensitive to their pain. They may expect children to be capable of things beyond their ability. They may tease children and younger brothers and sisters until they cry. They may be very critical of other people’s children or any children you bring into the relationship. Your partner may threaten to prevent you from seeing children you have no biological rights to, or punish children to get even with you. About 60% of people who beat their partner also beat their children.

“PLAYFUL” USE OF FORCE IN SEX: This kind of person may like to act out fantasies where the partner is helpless. They let you know that the idea of rape is exciting. They may show little concern about whether you wants to have sex, and use sulking or anger to manipulate you. They may start having sex with you while you are sleeping, or demand sex when you are ill or tired. They may want to “make up” by having sex after they have just been physically or verbally abusive to you.

VERBAL ABUSE: In addition to saying things that are meant to be cruel, this can be seen when the abusive person degrades or curses you, belittling any of your accomplishments. The abusive person may tell you that you are stupid and unable to function without them. They may wake you up to verbally abuse you, or not let you go to sleep.

RIGID SEX ROLES: People who choose to abuse typically expect the partner to play the “feminine” role; to serve them and insist that you obey them in all things. The abusive person sees you as unintelligent, inferior, responsible for menial tasks, and less than whole without the relationship. They will often tell you that no one else would want you or that you are nothing without them. They will remind you of everything they have done for you.

DR. JEKYLL AND MR. HYDE: Many victims are confused by the person who is choosing to abuse’s sudden changes in mood, and may think it indicates a special mental problem. Abusive people may be nice one minute, and explode the next. Explosiveness and moodiness are typical of people who beat their partners. Many victims feel if their partner would just quit drinking or using drugs, the violence would stop. This is usually not the case. Abusive people continue the abuse, even after they stop using alcohol or drugs, unless they also seek help for their abusive behavior.

PAST BATTERING: These people say they have hit a partner in the past, but the previous partner made them do it. You may hear from relatives or ex partners that the person has been abusive. A batterer will beat any person they are with if they are with that person long enough for violence to begin; situational circumstances do not make a person an abusive personality.

THREATS OF VIOLENCE: This could include any threat of physical force meant to control you: “I’ll slap your mouth off,” “I’ll kill you,” “I’ll break your neck.” Most people do not threaten their mates, but a batterer will say “everyone talks like that,” or “it didn’t mean anything” (or “it’s just a joke”).

BREAKING OR STRIKING OBJECTS: This behavior is used as a punishment (breaking loved possessions), but is used mostly to terrorize you into submission. The abusive person may beat on the table with their fist or throw objects around. This is not only a sign of extreme emotional immaturity, but indicates great danger when someone thinks they have the “right” to punish or frighten their partner.

ANY FORCE DURING AN ARGUMENT: A batterer may hold you down, restrain you from leaving the room, push you, or shove you. They may pin you to the wall, saying, “You’re going to listen to me!”

There are many, many reasons why it is difficult for a victim to leave: 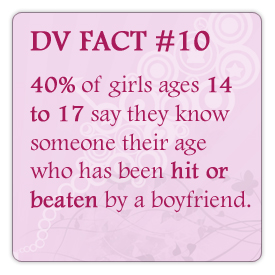